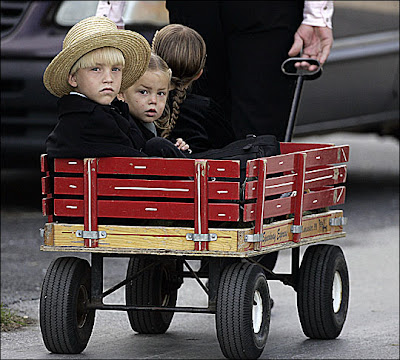 It's now been a little over a year since the horrific Nickel Mines tragedy, when an extremely disturbed man murdered several Amish schoolchildren.

Then there's the Amish response. They visited the man's wife and children. They visited his father. They cried with them. They attended the man's funeral. They donated money. They mourned others' losses as well as their own. Anger would have been completely understandable, but instead they offered compassion.

That's a completely different moral and emotional vocabulary than, to speak for myself, I'm used to. I understand it as a concept, I've tried to practice it myself at times, but I can't say I've found myself in that sort of world too often. I certainly don't see that sort of reflection or maturity tempering current war-mongering. I think it takes a particular type of petulance, callousness and vanity to eagerly clamor for violence, even when the likely disastrous consequences are intellectually if not emotionally clear. Meanwhile, it takes a certain kind of grace to face someone with that sort of attitude honestly, yet still respond in a positive way.

Violence is not a way of getting where you want to go, only more quickly. Its existence changes your destination. If you use it, you had better be prepared to find yourself in the kind of place it takes you to. Forgiveness does not mean the absence of grief, and losing a child, especially to violence, is one of the harshest of blows. The Amish community still has its pain, and some of the surviving victims still have significant if not severe health problems.

The actual shooting was astoundingly tragic. If there's something sad at this anniversary, besides its continuing effects, it's that the Amish response is so startling and unusual. If there's something hopeful, it's that their grace is both startling and inspiring. I find true virtue does give me pause, and the best way to honor the dead is to invite in that sort of reflection.

Here's NPR's fine coverage on the anniversary and listener's responses. Here's the Bill Moyers Journal piece on the same story, which also focuses on the book Amish Grace.